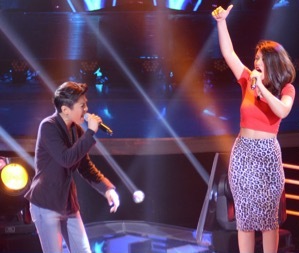 Young balladeer Timmy Pavino and the singing chemist Philippe Go from Team LeaThe coaches of the top-rating and twitter-trending singing reality show in the Philippines, ABS-CBN’s “The Voice of the Philippines” Season Two airing on The Filipino Channel (TFC) worldwide, have begun to trim down their teams in the ‘Battle Rounds’ and raise even higher stakes with the coaches’ power to ‘steal’ at play.

The teams of the four superstar coaches Lea Salonga, Bamboo, Sarah Geronimo, and Apl de ap delivered surprising and promising performances that left the worldwide audience in awe. The ‘Battle Rounds’ pitted two artists from the same team that went head to head to win a spot in the next round of the competition which is the ‘Knockout Rounds.’ The losing contestant, however, will still have a chance to move on to the next round if the other coaches use their power to ‘steal.’

First to battle were young balladeer Timmy Pavino and the singing chemist Philippe Go from Team Lea who sang “Forevermore” popularized by Side A. Although the other three coaches thought of Go to move on, Salonga saw potential from the young balladeer Pavino and chose him to move on to the next round of the competition. Next battle pairing for the team of the Broadway Diva was the happy-go-lucky-guy from Cebu Humfrey Nicasio versus Salonga’s namesake and power belter, Leah Patricio. Both sang the duet, “Forever” by Martin Nievera and Regine Velasquez. Patricio’s vocal control and power emerged victorious making her the second member of Team Lea to move on. 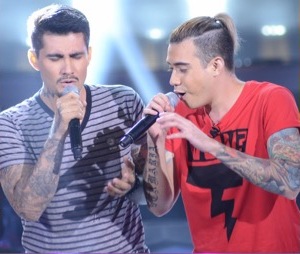 Former Rivermaya vocalist Jason Fernandez and daddy-rocker Bradley Holmes fighting over a spot for the Knockout RoundsVirtual artist Karl Tanhueco and former 90’s singer/actor Nino Alejandro let out their inner rock souls as they battled it out on stage, nailing “We Built This City” by Starship. Alejandro was chosen by Salonga to move on because of his experience as a performer. Cebu charmer Jem Cubil and former Star Magic artist Thara Jordana, on the other hand, delivered a romantic battle with the duet performance of “No Air” by Chris Brown and Jordin Sparks. Salonga said she was more swayed with the conviction that Cubil showed and chose him over Jordana. Another showdown from Team Lea was the battle between the singing nurse of Dasmariñas, Cavite Emil Sinagpulo and guitarist-turned-vocalist Mic Llave who both sang “More Than Words” by Extreme. At the end of their performance, Llave was chosen by Salonga to move on to the ‘Knockout Rounds’ because of the unique and raspy quality of his voice.

The Kamp Kawayan team led by Bamboo also delivered powerful performances during the ‘Battle Rounds.’ First to battle in his team was proud lesbian and band vocalist Rita Martinez versus the back-up singer and proud mom Suy Galvez who performed Gloria Jones’ “Tainted Love.” Martinez won the battle but Galvez, who thought her dreams were about to end, got stolen by Coach Apl to be part of his team. Freelance singer Ramonne Rodriguez and former Mojofly vocalist Lougee Basabas also gave Bamboo a run for his money after the two ladies performed the Bee Gees’ hit “To Love Somebody.” Basabas triumphed over Rodriguez and moved on to the next round of the reality show. 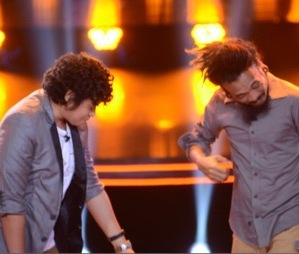 Another soulful battle in Geronimos team was between one-man-band Elmerjun Hilario versus reggae soul singer Kokoi BaldoAnother battle pairing from Team Bamboo was between two soulful and emotional singers, OPM lover Rence Lee Rapanot and song-writer Casper Blancaflor. The two sang Radiohead’s hit, “Creep” which gave all four coaches goose bumps. In the end, Rapanot was chosen to move on but Blancaflor was moved to tears when she got stolen by Salonga. Another epic battle, deemed as one of the best in the history of “The Voice of the Philippines,” was the clash between rocker chicks, Tanya Ileto-Diaz and Shairah Cervancia who both sang Yano’s popular OPM rock song, “Banal Na Aso.” Both rockers nailed the performance and were given standing ovations from the coaches but Bamboo chose Diaz to move on to the next round. The three other coaches, however, did not miss the chance to push their red buttons to steal Cervancia because of her performance. In the end, Cervancia chose to be part of Geronimo’s team.

The team of the Popstar Royalty also delivered soulful performances worthy of the spots for the ‘Knockout Rounds.’ Wakeboarder singer Daniel Ombao and modern-day telegram singer Jason Dy both serenaded the audience with their performance of “On Bended Knee” by Boyz II Men. Dy won over Ombao and is now moving on to the next stage of the competition. Another pairing from Team Sarah was between the soulful singers and belter, Monique Lualhati and Shaira Opsimar who sang a sultry rendition of “Lady Marmalade” popularized by Christina Aguilera, Lil’ Kim, Maya, and Pink. Lualhati emerged victorious over Opsimar. Another soulful battle in Geronimo’s team was between one-man-band Elmerjun Hilario versus reggae soul singer Kokoi Baldo. Both singers tackled on Mr.Big’s “To Be With You” and sang it soulfully. Baldo triumphed over Hilario but fate turned for the latter as Coaches Bamboo, Salonga, and Apl turning for the one-man-band-artist. Hilario, who was crying when the three coaches pushed their buttons, eventually chose Bamboo as his newest coach. 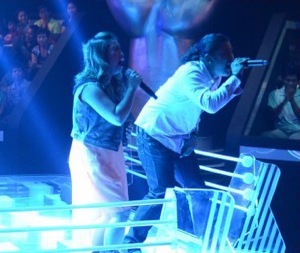 Another battle pairing from Team Bamboo was between two soulful and emotional singers OPM lover Rence Lee Rapanot and song-writer Casper BlancaflorDaughter of a school administrator in Sultan Kudarat, Mindanao Demie Fresco was also chosen to move on to the next round beating power belter Rosalyn Navarro after their strong performance of “Tell Him” by Barbara Streisand and Celine Dion. A battle of two different genres clashed when OFW rocker and daddy Douglas Dagal versus French-Filipina singer and 2013 TFCKat Winner for Europe Vanessa Monot performed “As” by Mary J. Blige and George Michael. Despite the flavorful harmony played by the two, Dagal was chosen to move on to the ‘Knockout Rounds.’

Team Apl also started the ‘Battle Rounds’ on a high note with former Rivermaya vocalist Jason Fernandez and daddy-rocker Bradley Holmes fighting over a spot for the ‘Knockout Rounds.’ Both rockers sang Meat Loaf’s “I’d Do Anything For Love,” but it was Holmes who emerged victorious.

Fernandez, meantime was surprised by Geronimo when she pushed her red button to steal the vocalist. The two ‘Marks’ of Team Apl also went head-to-head in the battles. Engineering student Mark Avila battled with the young crooner Mark Cando with the song, “This I Promise You” by N’Sync but it was the latter who triumphed the battle and will continue on in the next stage. The two ‘konteseras’ of Team Apl also battled it out on stage.

Mecerdita Quiachon and Maki Cao both sang Chaka Khan’s “Through The Fire” but it was Cao’s resonating voice that secured her a spot to the ‘Knockout Rounds.’ Last to battle for Team Apl were singing policewoman Janet Cadayona and former recording artist Arnee Hildago. Both mothers sang Basil Valdez’ “Kung Ako’y Iiwan Mo.” PO3 Cadayona won the battle but Hidalgo, who at first was doubtful about the song because of her range, impressed Bamboo and prompted him to push his chair, making Hidalgo the last ‘steal’ of team Kamp Kawayan. 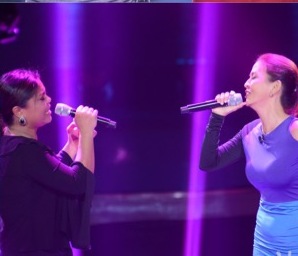 Singing policewoman Janet Cadayona and former recording artist Arnee Hildago. Both mothers sang Basil Valdez Kung Akoy Iiwan MoFind out who else will battle it out on stage and who will complete the ‘steal’ slots of Salonga and Apl in the continuation of the ‘Battle Rounds’ of “The Voice of the Philippines” Season Two on December 20 and 21, Saturday and Sunday (December 21 and 22, Australian Daylight Savings Time or ADST and New Zealand Daylight Savings Time or NZDT; December 20 and 22, Guam time) on TFC worldwide. Viewers worldwide can also watch the continuation of the ‘Battle Rounds’ via livestream or after its Philippine airing on TFC’s official online service, TFC.tv and via its video-on-demand or VOD (Internet Protocol television or IPTV) service available in the U.S.A., Canada, Europe, Australia, New Zealand, and Japan. 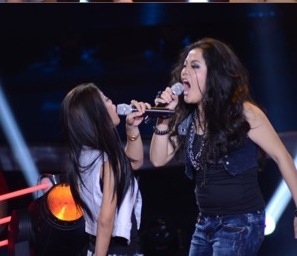