At the ‘Piyesta Para sa Santo Papa’ organized by “Bayan Mo, iPatrol Mo” at La Consolacion College, ABS-CBN urged Filipinos to express their gratitude to Pope Francis, who has blessed the nation with the message of humility, and to practice mercy and compassion in their daily lives.

By using ABS-CBN’s official hashtag #PopeTYSM (Pope Thank You Sa Malasakit) on social media, netizens can send their personal messages, prayers, pledges, or poems to give thanks to the Pope. These posts have a chance to be included in ABS-CBN’s Book of Thanks that will be given to Pope Francis upon his departure. 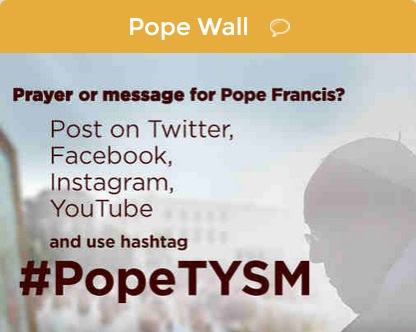 ABS-CBN’s PopeTYSM booth will also be placed in in key areas around the country. In it, Filipinos can record their special thank you message for Pope Francis.

By tuning in to ABS-CBN, ANC, DZMM Radyo Patrol Sais Trenta and DZMM TeleRadyo everyday, Filipinos can get the latest updates on the preparations for the papal visit, as well as special reports featuring people who have been inspired by the Pope.

This December, documentary program “Mukha” takes a peek into the lives and stories of people who have personally met or encountered Pope Francis. These include Archbishop Socrates Villegas, the president of the Catholic Bishop's Conference of the Philippines; Bishop Bong Baylon, the popular "selfie bishop" who took the once-in-a-lifetime chance to take a picture with Pope Francis (airing Dec 18 on ANC and Dec 22 on ABS-CBN); healing priest Fr. Joey Faller, who grabbed the Pope’s attention during his visit to the Vatican (Dec 25 on ANC and Dec 29 on ABS-CBN); and Fr. Rico Ayo, who had his own "selfie" experience with the Pope when he volunteered in the synod in Rome (Jan 1 on ANC and Jan 5 on ABS-CBN).

In January 2015, ABS-CBN Sunday’s Best will air weekly specials about the life of Pope Francis and the coming papal visit.

To follow the PopeTYSM campaign on a mobile phone, just access the PopeTYSM channel on iWanTV where all of ABS-CBN’s videos and features about the Pope, as well as the Pope’s activities can be found. Catch them live or catch up anytime anywhere using the iWanTV app on an ABS-CBNmobile SIM.