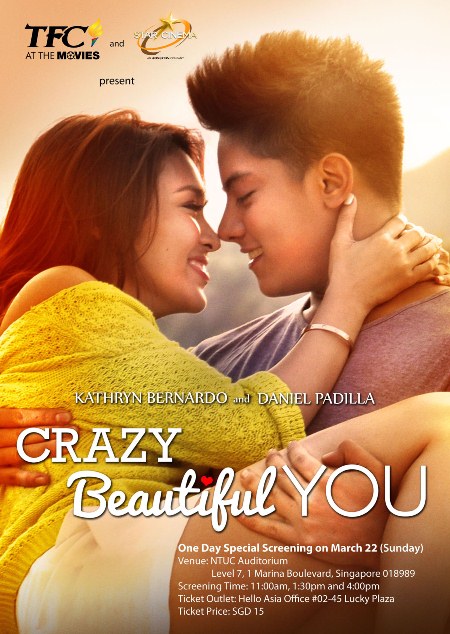 Star Cinema and TFC@theMovies bring the KathNiel fever to Singapore this MarchABS-CBN’s Teen King Daniel Padilla and Teen Queen Kathryn Bernardo will prove it is okay to be crazy, beautiful, and in love at the same time as they return to the big screen in Star Cinema’s latest offering, “Crazy Beautiful You” which will be shown by The Filipino Channel (TFC), in partnership with Asia Connect (S) Pte Ltd. to Kapamilyas in Singapore on March 22, Sunday at the NTUC Auditorium via TFC@theMovies.

“Crazy Beautiful You” centers on the life of Jackie Serrano (Bernardo), a rebellious, problem child, who gets sent to a medical mission in Tarlac, Pampanga (Luzon, Philippines) in her family’s hopes that she would change for the better. There, she meets the charming and kindhearted Kiko Alcantara (Padilla) who will look after and take care of her as they fulfill the medical mission assigned to them. Along the way, the two, played by the popular love team also called KathNiel, unexpectedly find themselves in an unforgettable and crazy romantic adventure that changes their lives forever.

Directed by Mae Cruz-Alviar (“She’s the One,” “Bride for Rent,” and “Past Tense”), the much awaited movie’s esteemed cast is composed of the award-winning and veteran actors Lorna Tolentino and Gabby Concepcion, with newcomer actor Iñigo Pascual.

Tolentino and Concepcion will play the role of the love team’s parents who have their own issues to settle with their children. Tolentino plays Dr. Lea Serrano, Jackie’s mother who desperately longs for her daughter’s forgiveness. Concepcion, meantime, plays the town mayor and father of Kiko who wants to correct his mistakes in the past to be the man his son deserves.

TFC, through TFC@theMovies, brings KathNiel’s latest romantic movie to Kapamilyas in Singapore March 22, Sunday at the NTUC Auditorium Level 7, 1 Marina Boulevard, Singapore. Tickets are available at Hello Asia office located at #02-45 Lucky Plaza or call their hotline at 9846 7645. Catch the one day special screening at these times: 11:00 a.m., 1:30 p.m., and 4:00 p.m.