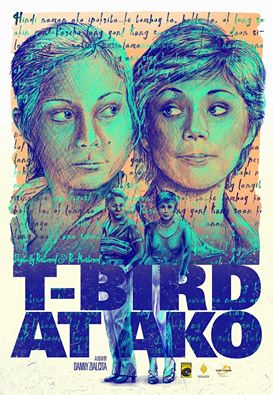 ABS-CBN Film Archives brings back to life the classic 80s film “T-Bird at Ako,” topbilled by Nora Aunor and Vilma Santos, as its digitally restored and re-mastered version hits cinemas this March.

The red carpet premiere was held yesterday at the University of the Philippines Film Institute Cine Adarna where Nora herself graced the event and personally showed her support for ABS-CBN’s film restoration project. Both solid Noranians and Vilmanians also flocked to the venue.

One of the most talked about and controversial movies in the 80s, “T-Bird at Ako” is the 6th film that is 30 years or older restored by ABS-CBN, joining other timeless titles such as “Himala,” “Oro Plata Mata,” and “Ganito Kami Noon, Paano Kayo Ngayon.”

When asked about ABS-CBN’s selection process of ‘classic’ titles to restore, Film Archives head Leo Katigbak explained, “The definition of classic really evolves over time. It's not just the old critically acclaimed award-winning movies per se but films that have taken on an iconic status due to director, stars, representation of an era and the like. Here in the Philippines, our classics tend to be more modern.”

He added, “The restoration campaign focuses on directors primarily. In the case of the 33-year old ‘T-Bird at Ako,’ it’s vintage Danny Zialcita with his snappy dialogue and witty repartee. It's also the last time that Nora and Vilma co-starred in a movie and with such a daring theme for its time.”

“T-Bird at Ako” tells the story of a sexy dancer (Santos) accused of homicide. She is defended by a female lawyer (Aunor) who tries to keep their relationship professional as the latter struggles with confusion as to her sexual preference.

“T-Bird at Ako” is among the 75 films restored by ABS-CBN Film Archives, in collaboration with Central Digital Labs, since it started its restoration project in 2011. Some of these restored films were already screened internationally via film fests, screened locally via red carpet premieres, aired on free-to-air and cable television, viewed via pay-per-view and video-on-demand, distributed on DVD, and downloadable even on iTunes.

Watch out for the high definition version of “T-Bird at Ako” in select cinemas this March. For more information on ABS-CBN’s Film Restoration, like its Facebook page at https://www.facebook.com/filmrestorationabscbn (Story/ photos by Kane Errol Choa)