TFC and CFO take partnership further in 2015 for overseas Filipinos 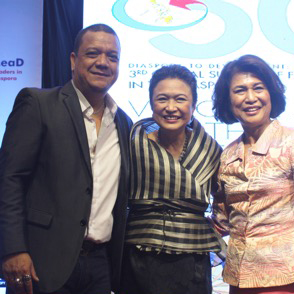 CFO Chairperson Secretary Imelda Nicolas, Global Filipino Diaspora Council President Atty. Loida Lewis with world-class performer and former overseas Filipino Mitoy Yonting at the 3rd Global Summit for Filipinos in the Diaspora (3GS)Right on the heels of their successful partnership for the 3rd Global Summit of Filipinos in the Diaspora (3GS) in February at the historic Manila Hotel, the Commission on Filipinos Overseas (CFO) and ABS-CBN The Filipino Channel (TFC), are gearing up for more partnerships for the overseas Filipinos in 2015.

Looking forward as one CFO Secretary Imelda Nicolas announced that the participation of the diaspora in local and international policy formulation and program implementation towards development, as tackled during the visioning exercise of the 3GS, will be further discussed in two upcoming conferences: the 2015 European Regional Summit in Cagliari, Italy during the third quarter of the year and the Youth Leaders in the Diaspora (YouLeaD) forum to be held in the Philippines in July this year.

Head of the European Network of Filipino Diaspora (ENFiD) Gene Alcantara said the organization is looking forward to the Regional Summit, the second for the diaspora council.

However, Alcantara believes that before they can look forward with a fresh outlook, there is a need to leave behind past issues and bad habits.  He cites that there is a need to “enhance our reputation as a people, to engender better community relations, and to give excellent examples.”

Secretary Nicolas addressing hundreds of overseas Filipinos (OFs) during the 3GS, cites more areas for collaboration amongst sectors for 2015Rachel Hansen, Founder/Editor of Roots and Wings Online Magazine, a Scandinavian-based online magazine says:  “The 3GS is a special platform for the diaspora to meet; exchange ideas and best practices; and get informed, inspired, and interested in various local and global issues that need our serious attention and solution.”

Meanwhile, the YouLeaD forum, scheduled later this year will again gather young Filipino community leaders all over the world to share best practices and discuss the issues they themselves face as part of the Filipino diaspora.  Lou Cabalona, 2012 Filipino-American Young Leaders of the Philippines awardee looks forward to the youth summit and says: “There are so many stories we have to tell - stories that celebrate our uniqueness and acknowledge our contributions to the world.

European Network of Filipino Diaspora Head and TFC’s JuanEU Konek host Gene Alcantara shares that one more area for collaboration - the 2016 Regional Summit - will be held in Europe this year3rd Global Summit of Filipinos in the Diaspora: Highlights During the 3GS, the largest and most significant gatherings of community leaders of Overseas Filipinos (OFs), CFO Chairperson Nicolas, said that the milestone attendance of nearly 500 OFs from 30 countries resulted in a deep collaboration across sectors, including media, and across countries.

“We have moved out of comfort zones to explore how and where we can make a difference.  We have confronted self-imposed restricting constructs of our egos and faced brave new worlds whether here in our country or in others.”

Synergy with other government agencies As a result of the two-day summit, OFs made a unified call for greater involvement in key issues affecting the lives of OFs.  Specifically, OFs want more involvement in the local government policy through Overseas Voting, lead agency of which is the COMELEC and with the Department of Foreign Affairs (DFA) as implementing arm. 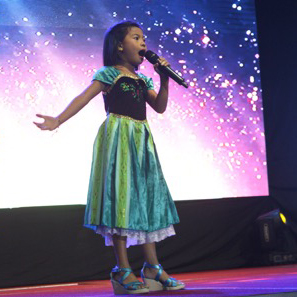 “The Voice” alumni Lyca Gairanod at the 3GS summit, showcases world-class performances that won her the first “The Voice Kids” Grand Champion titleGlobal Filipino Diaspora Council President Atty. Loida Lewis and the US Pinoys for Good Governance President Atty. Rodel Rodis, reported how they helped lobby in the Philippines for the passage of the Dual Citizenship Law and the Overseas Voting Act in 2013.  This makes the Filipino diaspora’s involvement in the formulation of national policies both significant and strategic.

The role of media Lewis and Rodis added that they also hope to become involved in international issues affecting OFs.

The USPGG is currently active in protesting the threat of the overtaking of the Spratlys and hope to do more lobbying for other issues, with the help of media.

During the 3GS, ABS-CBN Integrated News and Current Affairs Senior Vice President Ging Reyes talked about how transnationalized media plays a crucial role in bringing these issues to the front and center of the stage. She shared how during her stint as ABS-CBN International News Bureau Chief, she overcame personal challenges as an OF herself in order to be able to empathize with her subjects and bring the news to viewers of TFC.  She said: “I got to know hundreds of Filipinos...who left the homeland to seek a better future for their families.  I told their stories even as I felt their pain and shared their aspirations."

The TFC and myREMIT teams with Sec. NicolasCivil society in unity Aside from international affairs, OFs cited the need for a system where they can easily channel and monitor their resources for their many kababayans in need and network with other interested parties.

MENFID’s (Middle East Network of Filipino Diaspora) Interim Head Fidel Escurel said the creation of an OF hospital will help them consolidate healthcare for Pinoys in Qatar and hopefully across the Middle East.

Secretary Nicolas hopes that the global one-stop portal for Overseas Filipinos diaspora engagemement, BaLinkBayan, can answer many of the needs articulated during the 3GS.

CFO, with the support of TFC and other partners, hope to fulfill what it started in the 3GS. (Story/photos by Marianne de Vera)

The results of the 3GS Visioning Exercise in visuals 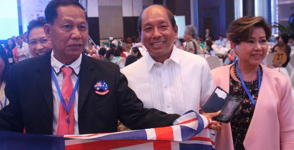 Secretary of Budget and Management Butch Abad with the European delegates