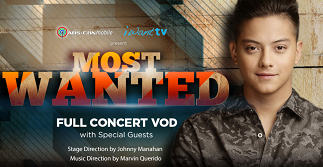 Daniel Padilla reaches out to fans with Most Wanted Concert on-demand on ABS-CBN mobileDaniel Padilla’s fans can now enjoy the return of the most-wanted concert of the year. They can now watch, for a limited period, Daniel’s Most Wanted concert using their ABS-CBNmobile-powered mobile devices.

Daniel rocked the SM Mall of Asia Arena during his Most Wanted concert last June 13. For those who haven’t watched it, or those who want to watch it again, this is the chance to relish the unforgettable experience again and again, anytime and anywhere using any suitable mobile device.

Daniel said that the good thing about this offer is that it’s very affordable. You just need to load P99 to your ABS-CBNmobile number. Then just text ‘DJP99’ to 2131 for the PIN that you can use to watch the concert. More details are available at www.djp.iwantv.com.ph.

Daniel’s fans also get a delightful bonus because, aside from the Most Wanted concert, they can also watch the DOS concert in 2014, Daniel Live concert in 2013, and two lyric videos of Daniel.

“We are doing this for all ABS-CBNmobile subscribers and all those who keep on supporting me and following all my gigs,” said Daniel.

Get your ABS-CBNmobile now and watch Daniel again and again.

ABS-CBNmobile is the first mobile phone service to offer exclusive content never before seen on TV or anywhere else. These include Team Gonzaga, I Do mobisodes, Dear MOR, and Invasion of Privacy, to name a few. It was also a pioneer in offering live streaming of ABS-CBN shows as well as a vast library of past episodes of these shows for subscribers to watch using their smartphones. These include the concert of Vice Ganda titled Vice Gandang Ganda sa Sarili.

Watch out, too, for Star Flix where the blockbuster tandem of Kim Chiu and Xian Lim will be featured this August.