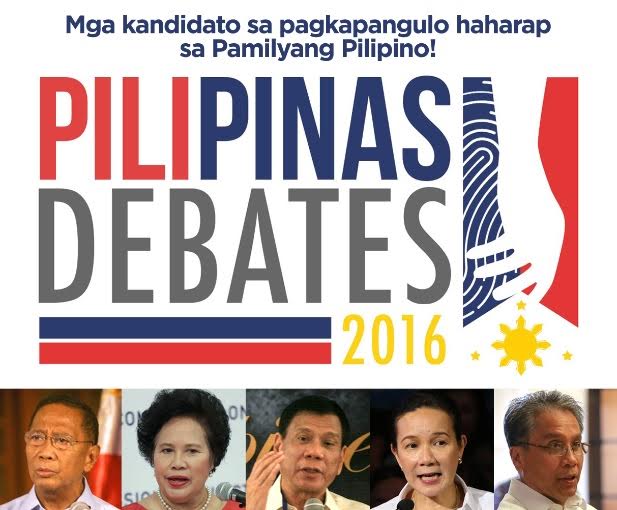 PILIPINAS 2016 Presidential Town Hall DebateThe Filipino people will be watching as five candidates for the highest post of the land share one stage for the last time in the final leg of the Commission on Elections' Pili Pinas 2016 presidential debate series.

The third “Pili Pinas Debate” is the last big opportunity for the candidates to prove they are ready, capable, and worthy to lead the country before millions of Filipinos here and abroad, as the debate will be aired live from the Phinma University of Pangasinan over multiple media platforms – ABS-CBN in the Philippines, ANC, the ABS-CBN News Channel on cable TV, DZMM TeleRadyo on digital television (ABS-CBN TVPlus), DZMM 630 on AM radio, ABSCBNmobile and online via livestreaming at news.abs-cbn.com, mb.com.ph and iwantv.com.ph.

Town Hall
With a town hall format, ordinary Filipinos - representing different sectors of society - will be asking the questions to the aspiring presidents of the Philippines. This format was assigned to ABS-CBN after a “drawing of lots” facilitated by the COMELEC involving all lead networks for the debate series.

The sectoral representatives were chosen among thousands of Filipinos all over the nation and the world who sent in their queries for the presidential candidates via ABS-CBN’s “Halalan Hugot” campaign. Their questions will touch on very relevant and pressing issues such as metro traffic and public transport, job security, health, foreign policy, basic public education, peace for Mindanaoans in conflict areas, and overseas Filipino (OF) concerns.

Each presidential candidate will get to answer all questions, which will allow the public to compare and decide which candidate is truly prepared and committed to address the issues raised.

The town hall debate will be held at the student plaza of the Phinma University of Pangasinan.

Face-Off
The candidates will also have an opportunity to challenge each other during the Face-Off segment. One candidate may grill a fellow candidate on his ability to govern and lead.

Ipanalo ang Pamilyang Pilipino
Happening two weeks before the national elections on May 9, ABS-CBN Integrated News and Current Affairs head Ging Reyes said the Filipino people can expect all five candidates to give their best and go all-out as they try to pull away from what is shaping up to be the tightest race to the presidency in recent years.

“We encourage voters to watch the debate. Wherever they are, ABS-CBN, with the COMELEC, KBP and Manila Bulletin – through all its platforms – will deliver this very important event to the Filipino people. Voters still have time to make up their minds about the candidates. Listen to their proposed policies, analyze their plans, look beyond motherhood statements and empty promises. This final debate is the last opportunity for voters to see where candidates stand on issues and how they differ,” she said.

Watch the COMELEC, KBP, ABS-CBN and Manila Bulletin’s Pili Pinas 2016 Presidential Town Hall Debate LIVE on April 24, 6 p.m. Manila time via TFC (time-shifted in the West Coast in the U.S. if via satellite) and ANC across all platforms worldwide. “PILI PINAS” will also be streamed live via ANC on IPTV and TFC.tv, and will be available on VOD under ANC's Current Affairs category.

Also catch the “Halalan 2016 Debate Special” before and after the debate on TFC, ANC, and DZMM TeleRadyo.

Viewers of the livestreaming at news.abs-cbn.com can also catch a digital special hosted by TJ Manotoc, who will discuss the social media buzz on the on-going debate. Meantime, TFC will also conduct community viewings in specific regions.

You can also join TFC’s call this election period for a country we all deserve. Post your selfie against a backdrop or a scenario you want improved, upload in your social media and use the hash tag #Vote4ASelfieWorthyPH

For more information, visit news.abs-cbn.com/Halalan2016/OV Watch the video at: https://www.youtube.com/watch?v=krbxos5SR8k&feature=youtu.be