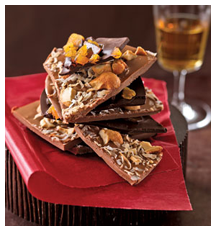 Chocolate BarkOne of the most memorable Christmas gifts I ever received was a box of red velvet cupcakes. Frankly, they weren’t the most Instagram- worthy nor the yummiest little things but receiving something a friend had slaved over for hours was the real present. Here are some edible gifts to experiment with; with about a month to go before Christmas, you’ll have more than enough time to perfect this for your company or family party!

Chocolate Bark
Ingredients: Milk or semisweet chocolate; classic toppings including dried fruits such as apricots, raisins, candied orange peel, cranberries and cherries, or toasted nuts including hazelnuts, pecans, almonds and pistachios; and contemporary toppings such as cereal, candied ginger, and dried fruits such as pineapple, blueberries and strawberries, or toasted pumpkin seeds and pine nuts.

2. Spread the chocolate evenly to about 1⁄8 inch thick using a small offset spatula. Sprinkle toppings on the chocolate and place in the freezer to set, approximately 20 minutes. 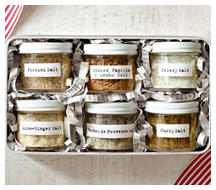 3. For even-sized pieces, cut up bark before it sets completely. If you like a more rustic look, allow the bark to harden completely before breaking it up into pieces. Store in a cool, dry place. 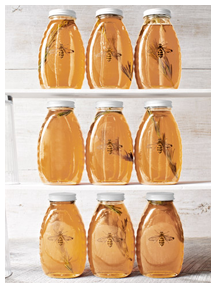 1. In a medium saucepan over low heat, cook honey and six sprigs rosemary just until honey begins to bubble around the edges. Remove from heat and let steep for 20 minutes.

2. Using tongs, remove and discard rosemary sprigs and any stray leaves. To decant, divide honey among four clean 16-ounce jars. Let cool completely, about 40 minutes. Insert a fresh sprig of rosemary into each jar, and tighten lids to seal.

1. For each infused vodka, use a twogallon pitcher to combine four 750-ml bottles of vodka and specified flavorings; steep as directed. 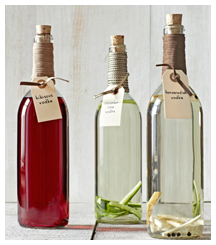 2. To decant, use a funnel to divide the finished vodka among four clean 750- ml bottles, then seal with corks.