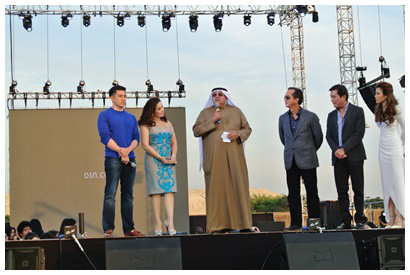 The event also cements OSN, the largest pay-TV network in the region, as the new exclusive hub for TFC subscribers in the Middle East. The exclusive partnership highlights the efforts of both OSN and ABS-CBN TFC to provide Filipino viewers with the ultimate television experience backed by OSN’s award-winning customer service, state-of-the-art technology and the widest choice of premium Filipino and Western content.

Over 40 of the biggest and brightest stars in Philippine entertainment had the city pulsating to the vibes and musical flavors of the number one variety show in the Philippines. The shows touched on themes of patriotism, Filipino pride, popular love theme songs from classic teleseryes, the things from the homeland that OFWs miss most, giving back to the homeland, among others, plus a whole lot of sizzling dance numbers in colorful, dazzling costumes before a gigantic screen backdrop of images that visually transported the audience to amazing landscapes. 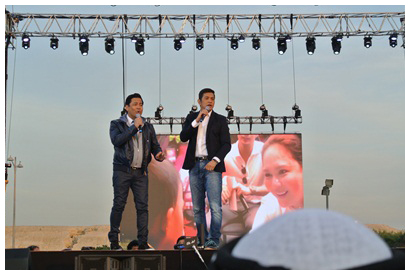 TFCKat, TFC's global singing contest, also held its regional finals. When the battle smoke cleared, it was Ana Blaza of UAE who won the Middle East crown, with her unique rendition of "Unwritten" by Natasha Bedingfield.

No less than Philippine Queen of All Media Kris Aquino, joined by Luis Manzano and Toni Gonzaga, announced before thousands the 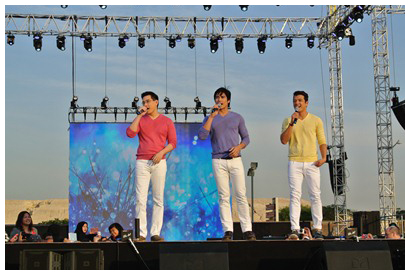 Richard Yap, Piolo Pascual and Jericho Rosalesexclusive partnership between ABS-CBN and OSN, the region’s leading pay-TV network, in the presence of OSN Chairman and KIPCO Vice Chairman Faisal Al Ayyar, ABS-CBN Corporation Chairman Gabby Lopez and ABS-CBN Global COO Raffy Lopez. The three executives paid tribute to the Filipinos in the Middle East, praising their excellence at work that made them preferred employees, and agreeing that they deserve the best that the ABS-CBN TFC-OSN partnership has to offer.

Emad Morcos, Senior Vice President, Business Development, Strategy & Digital said: “Our vision of serving the Filipino community in the Middle East and North Africa region has led to the successful collaboration between OSN and ABS-CBN. Today, OSN offers viewers the largest and widest choice of must-watch Filipino TV entertainment in the region, headlined by six of the most popular channels from ABS-CBN’s portfolio. I am confident that in 2014 and beyond, OSN will continue to reinforce its credentials as the ‘home of premium Filipino content.’

ABS-CBN Managing Director for Middle East and Europe Edgardo Garcia said before thousands during the second show: “ABS-CBN through TFC in the Middle East has found a committed partner in OSN in pursuing our mission to serve the overseas Filipino community better, so expect us to be even more actively present in Filipino events and activities this year as we share with all Filipinos here the good news of the best TV viewing experience from two leaders in the region.”

Indeed, the luscious musical odyssey that was “ASAP Live in Dubai” reinforced the Filipino presence in the region and ABS-CBN TFC’s ever expanding global reach to bring a welcome slice of home to the fast-growing Filipino community overseas. (Story/photos by Nerissa Fernandez)