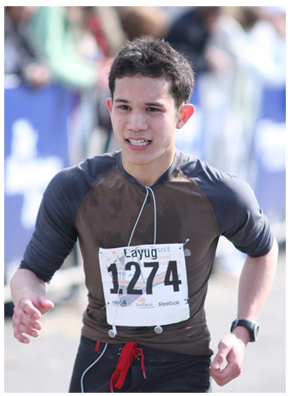 3:43:01. March 21, 2009. I had been running for more than three and a half hours. My body was screaming in agony. I could feel my knees buckling from exertion, my shoulders heavy from fatigue. My body was on the brink, I could feel it faltering. The words “Enough! Stop!” were all that registered on my weary mind. Then I heard the crowds in the distance, encouraging me to keep going despite the pain. Their cheers empowered me. I could feel their energy and I made it my own. I was so close now, so close to finishing the 42-kilometer marathon! (To compare, the distance from the Rizal Monument—Km. 0—to Tagaytay is 55 kilometers.) Eight months of training had brought me to this point. Eight months of skeptics doubting my resolve. Eight months of eating food that was not fried, had less salt and was more healthful than what I was accustomed to. Eight months of sacrificing late nights with friends to wake up for 6 a.m. runs four times a week. Eight months of neither beer nor hard liquor— not easy when you live in a college dorm. Eight months of allowing my grades to balance at the A-minus level, when taking time off my training would have made many As. Eight months of discipline and hard work.
Eight months for four hours of living life as it was meant to be lived—a fair trade.I was never a long distance runner. I had been asthmatic in my early childhood. On my varsity teams in high school, I was always one of the first to tire because I could not manage my energy levels adequately. Running a marathon had never been something I wanted to do. However, things were about to change. My perception of myself and the world around me was about to change.
3:56:22. That is three hours, 56 minutes, and 22 seconds of intense physical exertion. I crossed the finish line strong, having sprinted the final 200 meters, my last spurt of energy expended. Every other success I had achieved in my life was dwarfed by what I had just accomplished. There I was at the finish line in awe at the culmination of an eight-month commitment—the longest I have ever made to myself. But I couldn’t even speak. My best friend found me in the throng of finishers. She said she was my biggest fan. No, she wasn’t. At that moment, I was my biggest fan. I had done something I did not think possible for me.
This is not a piece on running a marathon; it is more of a challenge. I believe that a person needs to continually test what he perceives are the limits of his ability in order to grasp the limitlessness of his potential. I challenge you to do the same and make real what you have until now only dared to dream.