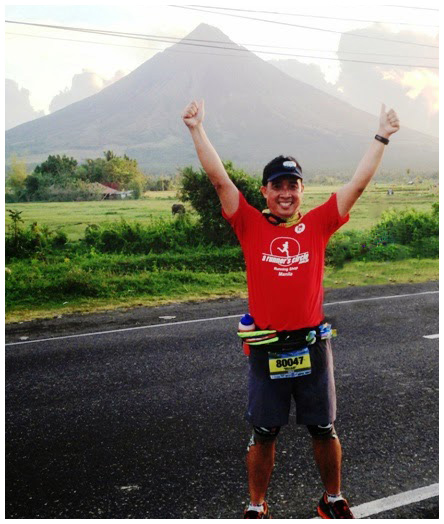 In a post on his blog, De Lima said his strategy to finish the race was to “get wet always” while running through three cities and five towns. Fortunately, almost all the barangays along the 80-km. route had stations ready with the all-important water for drinking or showering, plus biscuits and boiled eggs to tide the runners over.

“Kind-hearted and hospitable residents along the route—and there were many of them—took it upon themselves to prepare buckets of water for shower use by the weary yet undaunted runners,” De Lima added.
He crossed the finish line in 14 hours and 55 minutes, safely within the 16-hour cutoff.

His team took Sunday off but embarked on a recovery run by Monday. The setting? A beach in Quinapaguian, a remote Camarines Norte island that had no resorts, electricity or Wi-Fi. This was preceded by an outreach activity that saw the team distributing slippers to about 150 public schoolchildren living on the island. “A double inebriation from runner’s high and helper’s high. Good for the heart and sole,” De Lima concluded.