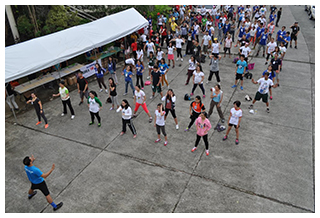 Getting ready to tackle the trailsAmidst cloudy skies brought about by the rainy season, the Lopez HR Council-Lopez Lifelong Wellness Walk the Talk got under way as scheduled at the Village East Executive Homes III and Eastridge Golf Village in Binangonan, Rizal on July 26.

Sponsored by First Balfour, around 350 participants composed of employees from the Lopez Group, family members and friends flocked to this monthly Lopez wellness undertaking.

A morning treat of taho,nilagang saging, biko and puto were provided to the well-wishers by the registration crew spearheaded by Anchel Cruz of HR-Employee Relations. 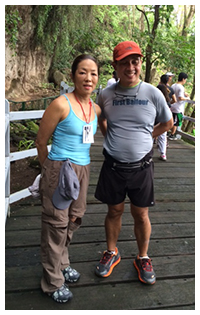 LGFI executive director Cedie Lopez Vargas with First Balfour Corporate Communications head Vicente de Lima IIThe program proper started with the invocation courtesy of HR assistant Jeanette Lanting, and was followed by the singing of the national anthem and the recitation of the Lopez Credo and Values by management trainee Lace Ramos.

VP for HR Caloy Salonga delivered the welcome remarks to jumpstart the activity.

After the distribution of bottles of mineral water by the sponsors, the walkers trudged a well-paved concrete road and entered a tunnel that was in almost total darkness. Upon exiting, one finds the Angono-Binangonan Petroglyphs Site Museum which showcases the cultural and artistic heritage of Rizal.

Exiting the museum, they climbed a rocky stairway toward the historic Angono- Binangonan petroglyphs, the oldest known works of art in the Philippines. There are 127 human and animal figures engraved into volcanic tuff dating back to 3,000 BC.

Presidential Decree No. 260 declared the Angono Petroglyphs a national cultural treasure in 1973. The petroglyphs are also included in the World Inventory of Rock Art under the auspices of UNESCO, ICCROM and ICOMOS, and the 100 Most Endangered Sites of the World.

Arriving back at the entrance of the dark tunnel, the participants were treated to a hearty brunch—and a First Balfour towel—to end the day’s activity.

Employees are invited to be a part of the eighth anniversary of Walk the Talk at the First Philippine Industrial Park in Sto. Tomas, Batangas on August 23, 2014. (Gerbs De Castro) 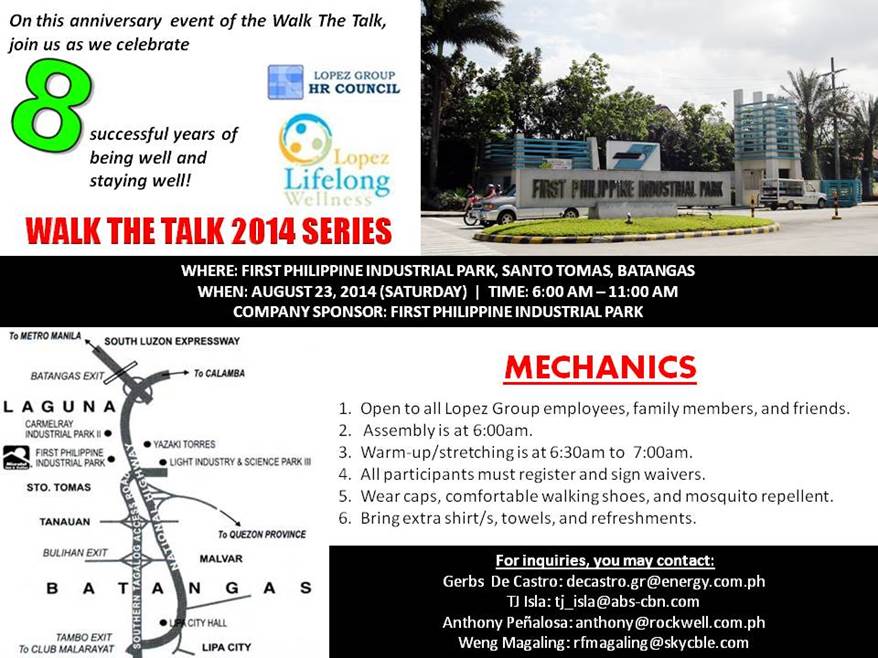 Be a part of the 8th Anniversary of the Lopez Walk the Talk this August 23, 2014 (Saturday) at the First Philippine Industrial Park, Sto. Tomas, Batangas! 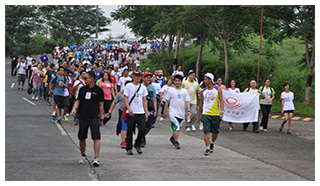 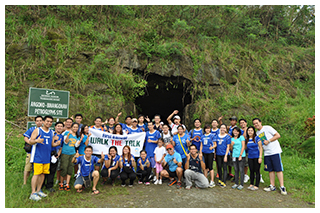 The rest of the delegates from sponsor company First Balfour 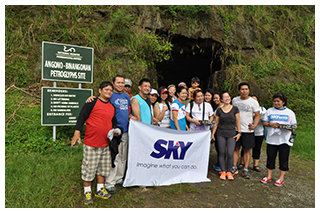