EDC, one of the world’s largest producers of geothermal energy, showcases its expertise in Chile after bagging its first international concession area in the South American country early this year.

The journey to the other side of the world caps several years of formulating and executing an international strategy, given EDC’s technical expertise, capital and the resources at its disposal.

EDC Chile’s Manuel Sanchez, Manny Ogena and Team Everest with Amb. Consuelo Puyat-Reyes of the Embassy of the Philippines in Chile“It all started in 2009, when I took on the helm of EDC. I realized that in five years’ time our domestic growth prospects would be completed and that our growth trajectory ended. So I asked for a green light from Piki [chairman and CEO Federico R. Lopez, or FRL] to attend a couple of regional conferences in order to start building a network of industry relationships and to send out the message that EDC is open for business on the world stage,” EDC president Richard Tantoco explained.

In 2009, Tantoco, together with director Jon Russell, Business Development VP Vincent Villegas and manager Jose Hernandez, zeroed in on Chile and conducted the company’s first due diligence trip, in a search for the right energy market to deploy the company’s capabilities in geothermal exploration and development. They identified 29 countries, all located within the Pacific Ring of Fire, with geothermal potential. The list was whittled down to 26, with Chile solidly ranked as the number 1 prospect. 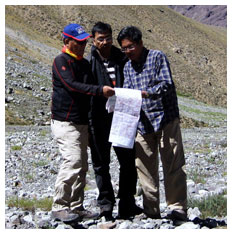 Maps come in very handy in reorienting directionAccording to Tantoco, Chile emerged as the top choice based on criteria such as the presence of a very stable political regime, market practices, transparency, an attractive electricity market and, importantly, the presence of resources.

Chile is a long, thin ribbon of land at the western edge of South America. The country shares a border with Peru, where EDC has also applied for concession areas, Bolivia and Argentina, and is tipped by the Drake Passage. It is considered one of the most stable and prosperous South American countries.

EDC Chile Limitada was incorporated in February 2010 preparatory to the company’s entry to Chile, after which it submitted direct applications and bid for several concession areas. EDC also set up an office in Las Condes, Santiago, the capital city. The representative office is headed by country head Manuel Sanchez and finance and administrative analyst Felipe Contardo, who are both Chileans.

Puma Lodge, at 4,500 feet above sea level, houses the team’s bunk quarters and office“We’re building our team in Santiago with Filipino and Chilean talent. Now that we have five sites to work on aside from two concessions in Peru, we have to make sure that we have solid execution capability in the country,” explained Villegas.

Arman Lapus, VP at First Gen and now seconded to EDC, will head the business and project development efforts in Latin America and will be, by midyear, the first full- time expatriate of EDC to Chile.

“Arman is a great first step in our efforts to build a solid team. We are continuing to look for more entrepreneurial leaders, self-starters for commercially and technically experienced people to staff up and grow the business. It will be exciting, for sure,” Tantoco said. 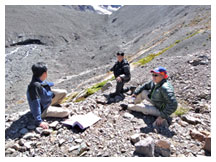 Tracing the source of reported hot springs at the Don Rolando siteA month later, the company signed a joint venture agreement with Hot Rock Limited (HRL) of Australia, with which it will codevelop two other sites in Chile—Calerias and Longavi— in addition to Quellaapacheta and Chocopata in neighboring Peru. EDC holds a 70% stake in each of these projects.

The Hot Rock deal was the culmination of a relationship that began with a heads of terms agreement in November 2011; the agreement laid out the framework and main commercial principles for EDC’s acquisition of the controlling stake in the South American sites.

FRL had described the partnership as “the first steps in realizing our vision to establish a global presence and further solidify our position as the preeminent international leader in geothermal power development.”

“These projects will showcase EDC’s expertise and help elevate the company as a Philippine corporate champion on the world stage,” he stressed. 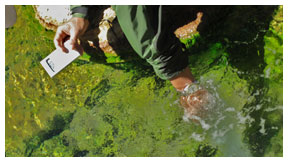 A hot spring in CaleriasEDC has deployed a 30-person team, led by Technical Services Sector SVP Manny Ogena, to start development activities on the projects. The lineup includes 27 of the Philippines’ best geothermal specialists, geologists, geochemists, geophysicists and geophysical survey technicians; members of the Philippine Mt. Everest team are also on hand to help the scientists deal safely with high altitudes and extreme conditions on the sites.

“This is what our geo-scientist teams are built for, this is their dream—to explore, map and collect samples places like the Andes Mountains. They’re excited, so we don’t lack volunteers,” Tantoco enthused.

The scientists will have their hands full doing a slew of tests—fluid, gas and rock sampling and analysis, fault mapping and magnetotelluric surveys— that will all be used assess the size of the resources and to pinpoint where to drill.

“We want to make sure that we drill in the most attractive sites first, so we’re systematically exploring,” explained Villegas. Villegas estimated that the actual drilling of the wells might well happen by the latter half of 2013. The company currently owns nine drilling rigs, with two more arriving this year, and has drilled over 900 wells for geothermal development and exploration around the world.

EDC, formerly known as Philippine National Oil Company- EDC, was created in March 1976 to “explore, develop, produce, generate and market indigenous energy sources and lessen the country’s dependence on imported fuel.” By 1983, the Philippines effectively became the second largest geothermal power in the world with installed capacity of more than 600 megawatts, thanks to EDC.

By 2000, EDC’s portfolio stood at 1,150 MW, which is equivalent to about 60% of the Philippines’ total geothermal capacity. EDC generates about 11% of the electricity in the country.

PNOC-EDC became a part of the Lopez Group in 2007 when First Gen Corporation acquired the government’s 60% stake in the company at a cost of P58.5 billion. It formally became known as EDC in 2008.

EDC’s forays in Latin America highlights the fact that the company is bringing Filipino talent and expertise overseas, fulfilling its vision to “become the global leader in geothermal energy”—a step, a mountain and a country at a time.

“When we compare ourselves to other local companies, we see that hardly any of them have something unique to bring to the global arena. But for EDC, when we compete in that arena, we are to say to a minister of energy ‘We’re the world leader in geothermal, with 36 years of experience. We can help solve your problems by bringing in affordable, reliable and sustainable base load energy.’ The reaction we always get is, ‘Welcome, EDC, please come in to our country, we want you to invest.’ This happens because we truly are bringing something unique to the table,” Tantoco said.