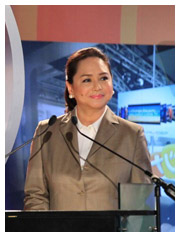 ABS-CBN president Charo Santos-Concio during the company’s stockholders’ meetingABS-CBN Corporation reported a 7.0% increase in its net income for the first quarter of 2014, amounting to P538 million, compared to P503M for the first quarter of 2013. The growth was driven by strong performance of its film business, global distribution and pay TV networks, resulting in a 3.4% rise in net revenues to P8.2 billion, compared to P7.9B for the same period last year.

“We are off to a good start in 2014,” said Aldrin Cerrado, the company’s chief financial officer (CFO). “I am particularly pleased that we were able to grow our net income by 7.0% considering that last year’s results included election- related revenues.

Star Cinema movies generated more than P600M in revenues for the company. “Girl, Boy, Bakla, Tomboy,”“Bride for Rent” and “Starting Over Again” brought in more than a billion pesos in ticket sales both here and overseas.

The company’s revenues from global operations jumped 22.1% during the first quarter of 2014, boosted by the international release of Star Cinema movies and the success of events such as “ASAP Dubai.”

As of the end of the first quarter of 2014, ABS-CBN Mobile, one of the company’s key initiatives, had approximately 300,000 subscribers.

Ron Valdueza, head of Corporate Services Group 2 and Group CFO, stated: “I am confident that our company will deliver strong results this year. We are undertaking various initiatives to generate revenues beyond advertising, as well as control our costs, and I believe we will reap the rewards from these efforts in the coming years.

“Our O Shopping channel, which we launched only last year, is likely to break even this year, while our educational theme park, KidZania, is expected to open for business in Bonifacio Global City during the first quarter of 2015,” added Valdueza.

International brokerage firms, including Deutsche Regis, Credit Lyonnais and Maybank ATR Kim Eng, have included ABS-CBN in their research coverage and are positive about the company’s future prospects. ABS-CBN is one of Credit Lyonnais’ top stock picks with a target price of P52. (Kane Choa)