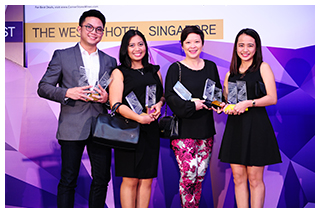 ABS-CBN Marketing head Cookie Bartolome (3rd from left) with (l-r) Mori Rodriguez of ABS-CBN Digital Media and Krystel Agnote and Micah Rivera of ABS-CBN MarketingABS-CBN Corporation was crowned the inaugural Best in Show at Marketing’s Spark Awards for Media Excellence after bagging three Gold, two Silver and four Bronze awards in categories including Best Event by a Media Owner and Best Campaign by a Media Owner.

It sealed the top honor and made history after edging out closest rival GMA Marketing and Productions which bagged three Gold, one Silver and three Bronze trophies.

The Spark Awards is the first of its kind organized by Singapore-based Marketing magazine and honors top media owners in the Southeast Asia region, giving them the chance to showcase their value proposition and strength to the industry.

More than 170 entries were received before they were assessed by media professionals who head some of the most renowned agencies in the region, such as Havas, Mindshare and ZenithOptimedia and others.

Held at the Westin Hotel Singapore, the gala dinner saw Gold, Silver and Bronze trophies being handed out across 24 categories.

Marketing, launched in 2002, is “Asia’s leading source of advertising, marketing and media intelligence with editions in Singapore, Hong Kong and Malaysia.” (Excerpted from www.marketing-interactive.com)