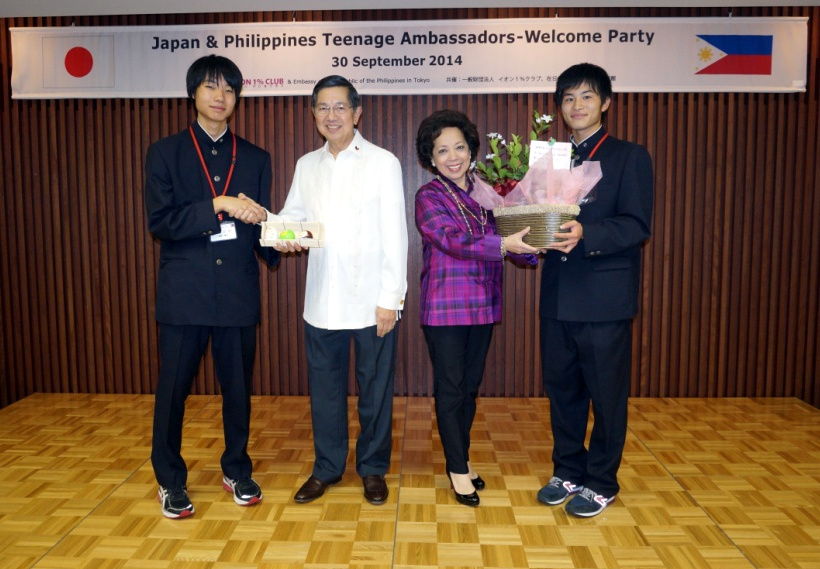 Presentation of gifts to Amb. Manuel M. Lopez and Maritess L. Lopez by Sendai Nika Senior High School studentsAmbassador Manuel M. Lopez (AMML), with spouse Maritess L. Lopez and officials of the Philippine embassy, recently welcomed the 20 Filipino and 20 Japanese participants of the AEON 1% Club Foundation Japan- Philippines Teenage Ambassadors program at a party in their honor at the Philippine embassy in Tokyo.

The Teenage Ambassadors program is an annual cultural exchange program between high school students of Japan and another country sponsored by the AEON Group. This was the first year the Philippines was chosen as the partner country for the program. The AEON 1% Club Foundation and concerned Philippine agencies including the Department of Foreign Affairs and the National Youth Commission agreed that Sendai Nika Senior High School, located in the Tohoku region, and the University of the Philippines Integrated School will participate in the program.

At the welcome party, AMML thanked AEON for organizing a project that promotes friendship and understanding between Filipino and Japanese youth. He also expressed appreciation for AEON’s donation of more than ¥100 million to victims of last year’s typhoon Yolanda in the Philippines.