KidZania Manila to open in 2015 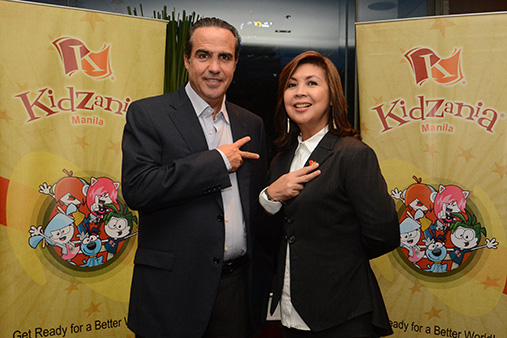 KidZania founder Xavier Lopez and KidZania Manila governor Maricel Pangilinan-ArenasKidZania, one of the world’s fastest-growing family edutainment centers, is set to open a P1-billion interactive, kid-sized city in the Philippines next year.

KidZania Manila, currently being developed in Bonifacio Global City in Taguig, is a first-of-its-kind indoor play center that allows children to freely explore a kid-sized world and choose from over 100 roleplaying activities in different establishments sponsored by real brands. It is expected to cater to 600,000 visitors annually.

Originally from Mexico, KidZania has become a global phenomenon, with 16 locations in 13 countries. It also has more than 12 facilities currently under development around the world.

In the Philippines, KidZania will incorporate maritime activities and other activities that will promote care for the environment.

Aside from building more facilities, KidZania founder Xavier Lopez said they are also planning to expand KidZania by selling merchandise and creating a children’s community.

KidZania Manila is set to open in early 2015. (Excerpted from www.abs-cbnnews.com)