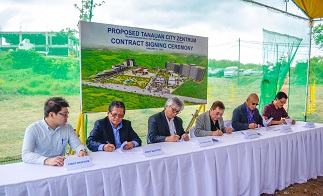 Set for completion by June 2016, the development will be the new location of the municipal hall of Tanauan as well as commercial and mid- to high-end residential spaces in Brgy. Natatas. The contract signing for an additional works package for the ongoing Yazaki-Torres Manufacturing Inc. (YTMI) facility project in Calamba, Laguna was also held during the groundbreaking ceremony. The Zentrum roadworks project is the third in a series of projects awarded by the Torres Group of companies. In photo are (l-r) First Balfour’s Atty. Vincent Lo, Rey Villar and Anthony Fernandez and YTMI’s Feliciano Torres, Roger Perez and Atty. Odee Olan. (Story/Photos by: Dolly Pasia)