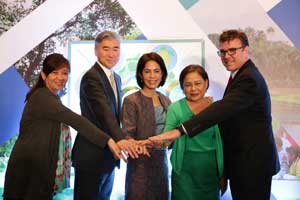 THE Department of Environment and Natural Resources (DENR) is collaborating with the United States Agency for International Development (USAID) to enhance the protection and conservation of the country’s rich biological diversity.

The DENR and USAID launched the Protect Wildlife project, a five-year, P1.2-billion initiative that seeks to address biodiversity loss and rampant wildlife tracking in the Philippines. DENR Sec. Gina Lopez and US Ambassador Sung Kim led the launch of the newest biodiversity conservation project in the country, held at Sequoia Hotel in Quezon City on March 6. The event,co-organized by the USAID and the DENR’s Biodiversity Management Bureau, was part of the World Wildlife Day celebration on March 3. Amb. Kim said that the project was part of the continuing collaboration between the two governments, along with the private sector, civil society and individual communities to strengthen natural and environmental resource management in the country. “Protect Wildlife" is not only the name of our project. It is also the imperative for all of us to take care of the species with which we share the planet,” he added. Lopez lauded the project’s tagline, stating that “conservation is not protecting nature from people. It is protecting nature for people.” She reiterated that the perspective of the DENR under her leadership was area development and making sure that the resources in an area, especially its flora and fauna, are enjoyed by the people themselves. Lopez said that nurturing the country’s endemic species was the country’s contribution to humanity. “Wildlife is therefore an integral part of developing areas. Taking care of them will give us great ecotourism zones that can help people in the communities and lift them out of poverty,” she stated. Two pilot areas have been selected for the project: Palawan province including Tubbataha Reef, and the Sulu Archipelago including Zamboanga City and Tawi-Tawi province.