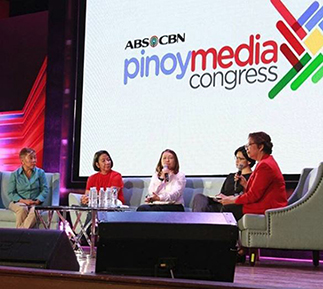 Journalists led by ABSCBN Integrated News head Ging Reyes, Jeff Canoy and Christian Esguerra, media personalities Bianca Gonzalez-Intal and Bela Padilla, creative heads Rondel Lindayag and Vanessa Valdez, and digital experts Ben Ravina and Dennis Lim bannered the speakers in the event participated in by over 1,200 students and teachers from all over the Philippines.

With the theme “Beyond Hits and Hashtags: Harnessing Digital to Help Build a Better World,” this year’s PMC tackled the most pressing issues in news media today. These included the proliferation of fake news on social media that was discussed by Bayan Mo, iPatrol Mo head Rowena Paraan, ABS-CBN head for Futures, Standards and Ethics Chi Almario-Gonzales, journalist Inday Varona and UP professor Clarissa David; and the evolving newsroom and journalists of media organizations as told by Reyes and Manila Bulletin executive editor Pinky Colmenares.

It also touched on how digital technology is being used in producing new experiences for Kapamilya viewers like in the case of “Bagani,” which according to ABS-CBN creative manager Ays de Guzman will soon have an online extension, as well as in restoring classic Filipino films, just like what is being done by Leo Katigbak and ABS-CBN Film Restoration.

For the second year, the twoday event held an interactive live broadcast in the Visayas, where students watched the sessions and asked questions live via satellite from Cebu Technological University.

ABS-CBN and PACE also awarded the winners of the 1st Class Project Mini-Documentary competition, which was ruled by the group from De La Salle University-Dasmariñas.

There were also educational activities held in ABS-CBN, such as a Ricky Lee scriptwriting workshop, a BMPM citizen journalism and media literacy seminar, film screening of restored classics and studio tours.