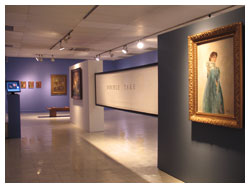 DID you really see what you thought you saw? Was what you always knew as real merely a cleverly woven myth? Look at evolution and transformation once again in Lopez Memorial Museum’s new exhibit, Double Take.

Curated by the husband and wife team of Chit and Eileen Ramirez, Double Take features works from the museum’s permanent collection, LVN archival photographs and a video installation by young director Raya Martin.

According to Eileen, “Impassioned battles are waged upon any number of crafted platforms—notions of blood, glory, territory and ultimately, nation. In mining specific aspects of the LVN film still archive, particularly war films spanning several eras of Filipino filmmaking, Martin, the exhibit’s featured artist, counts on the museum infrastructure to set off a playing on the eyes and mind.”

Lopez Museum’s larger gallery spaces show pronouncements from the historian Floro Quibuyen, art historian John Clark and theorist Marian Pastor Roces to set off seminal pieces in the collection by 19th century painters Juan Luna and Felix Resurreccion Hidalgo. The two artists are also reexamined in light of discourse and personal communication with the national hero, Jose Rizal. Within these sites, text and image encounter each other hopefully to engage visitors in reassessing what these icons stand for vis-à-vis such charged concepts as country and parity.

Double Take also invites attention on images that hint at how Luna and Hidalgo saw the everyday as colonial subjects egging for recognition. It also brings to the fore pictorial practice that, in one way or other, propelled the imaginations of individuals ultimately believing they were brothers making up a single race, to take on sword, spear, rifle, and even talismans on bare skin.

Eileen adds, “It is in summoning such clichéd yet still charged tableaus of the real and unreal (like a flank of “battle-worn” shields girding up for a no-holds-barred fight) that this exhibition counts on for inquiry, at the very least, to take place. It is in this sense that Double Take hopes to occasion revisitings, if not restitution.”