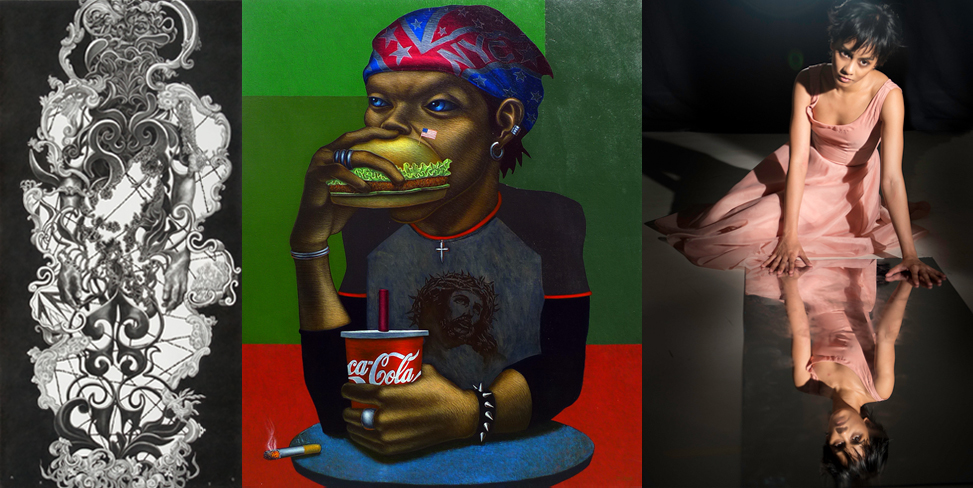 L-R: From the Pillars Series by Mike Adrao, charcoal on paper; The King by Leslie de Chavez, oil on canvas; and contemporary dancer/ choreographer Ea Torrado“It’s complicated,” a phrase popularized by social media, has become the catchall for undefined and problematic relationships typical of the postmodern world.

Seeing parallels between these and the complex relationship of the Philippines with its colonial pasts, the Lopez Museum and Library, in partnership with Tinaw Art Gallery, opens its first exhibit for the year, Complicated, on February 21, 2014.

Adrao’s charcoal-on-paper works represent various forms of colonization our country has undergone. Collectively titled “Colony,” they are made up of intricately ornamented, largerthan- life anthropomorphic pillars and delicately-drawn insects whose patterns were researched from the Lopez Library collection. Several of these pieces were selected for the curated “platform exhibits” representing Southeast Asian art trajectories in the recent Art Stage 2014 in Singapore.

De Chavez presents installations and paintings that focus on colonization, not just as the context of our history, but as an ongoing process. One work in particular is created in reaction to the museum’s Per Pacem et Libertatem (“For Peace and Liberty”) studies. These studies are what remains of a mural-sized work by Felix Resurreccion Hidalgo commissioned by the American colonial government and exhibited during the 1904 St. Louis Exposition.

A choreographer and dancer, Torrado came up with a three-channel video installation based on Jose Rizal’s Sisa and reflections on the museum’s iconic España y Filipinas by Juan Luna. Using Sisa’s search for her missing children as a metaphor for postcolonial identity, Torrado presents the search for the desaparecidos (“disappeared ones”) and victims of extrajudicial killings as premised in the promises of modernity and progress which are both at the core of nation building and Luna’s painting.

This film is produced with the support of Tuchi Imperial, sound designer Chris Aronson, cinematographer and film editor Dan Pamintuan and the ABS-CBN Film Archives.

These commissioned works are contextualized amid masterpieces from the museum’s painting and archival collections. Works by Luna, Fabian dela Rosa, Juvenal Sanso, Jerry Elizalde Navarro, Bencab and Ang Kiukok, among others, are exhibited with select books from the library’s collection and rich archive of colonial photographs, maps, travel journals, sketches and cartoons, including those done by Tony Velasquez, Liborio Gatbonton and Mario Dangan. The exhibit is further supplemented by loaned artworks by Sanso and contemporary artist Anton del Castillo.

Complicated, curated by Ricky Francisco and Ethel Villafranca, will run until August 2, 2014.