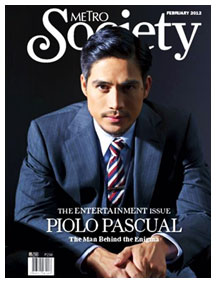 Bringing out the industry’s big guns, there was no better option than to put Piolo the country’s ultimate actor on the cover—none other than ABS-CBN’s main man Piolo Pascual.

Although this will be his third time to grace Metro Society’s cover—his first one was alongside Gabbi and Monica Floirendo, and the second was with Ben Chan and Richard Gutierrez—it really is his first solo cover for the magazine.

Truth be told, this monumental star could’ve used this platform to finally put to rest swirling rumors that have resurfaced due to the public rant of showbiz sweetheart KC Concepcion. However, Piolo remains the ultimate gentleman, with no mean bone in his being.

See how they are transformed—thanks to the stunning ensembles from SSI—into a bunch of period characters suited to the set of the popular international TV series called Mad Men.

Apart from all that, this issue also features an impressive roster of Movers and Shakers from different entertainment fields. See how they got their start, check out how far they’ve come and take a peek at what they’re up to.

From the theater realm, get to know stellar actors Cris Villongco, Felix Rivera, Joanna Ampil and veteran actor/director Robbie Guevarra. For film and TV, the magazine was lucky to get the likes of screenwriter Ricky Lee, cinematographer Neil Daza, film and TV actor Edgar Allen Guzman, film directors Brillante Mendoza, Marlon Rivera and Paul Soriano, and TV director Lauren Dyogi. As for the world of music, radio jock Andi Manzano as well as Universal Records’ head honcho Kathleen Dy-Go were both gracious and gorgeous during the interview. This feature definitely packs a meaty punch.

And the hits just keep on coming—as even the shorter features this month revolve around upcoming names and faces in the entertainment industry.

With exclusive Marc Jacobs and Ermenegildo Zegna fashion stories and a whole lot more in store, there’s no reason why you shouldn’t grab a copy of the latest issue of Metro Society!