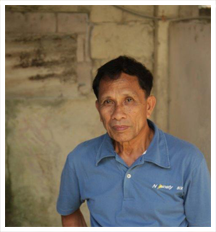 Mang Domeng, the carpenter who wears Italian shoesThere is a retired carpenter still employed on a project basis at the Lopez Museum and Library who is known for wearing Italian shoes to work. Every time he goes up the ladder, his fellow workers would wink at each other and say: “Those are real Italian shoes.”

He is fondly called Mang Domeng, but his name is actually Domingo Magaling, 69, and he has been connected with the Lopezes since the 1960s while Benpres Building was being constructed. Mang Domeng was a selftaught carpenter employed with the Sugay Construction Company in 1959. Among the company’s projects were the old ABS-CBN and Benpres buildings. After the latter building was finished, Mang Domeng was left for the finishing touches when Lopez executive Alex Garcia offered him a job as maintenance man. He readily accepted the job and he recalls that their office was on the fifth floor of Benpres Building.

“When a tenant calls us, we are the ones to service them,” says Mang Domeng in the vernacular when asked what his duties were.

Since he was employed by Lopez Inc., he would also do carpentry work for the homes of the Lopezes, like former Vice President Fernando Lopez, Conchita Lopez-Taylor, Ambassador Manuel M. Lopez, and the family of Lopez Group Foundation Inc. (LGFI) chairman Oscar M. Lopez.

“Yes, he would do carpentry work for my siblings and parents,” says Angela Lopez of LGFI, “and he is known to us as ‘Magaling’ and not Mang Domeng.”

The quality of the work of Mang Domeng may be seen whenever there is an exhibit at the Lopez Museum and Library which changes every six months. At one point, a museum visitor mistakenly thought that a display shelf was bought from a well-known furniture store and was surprised to be told that it was done by Mang Domeng.

Mang Domeng has found working for the Lopezes as something he enjoys doing because he has seen how they treat rich and poor employees alike.

“They would even embrace me when they see me, like Sir Rogy (Panganiban),” he says. He also remembers the kindness that Marissa Lopez showed him when she gave his only son a job at SkyCable.

Mang Domeng has seen how the value of hard work is properly compensated in the Lopez Group not only in terms of money but in the respect and kindness the Lopezes show to every employee.

40 years with the Lopez Group Through the more than 40 years he has been with the Lopez Group, Mang Domeng, with his wife Zenaida Alba Magaling, was able to put their four girls and one boy through school. He relates that after they graduated, two of his children were recruited by an agency that unfortunately was illegal and ran off with their hardearned savings. Fortunately, their relatives in Italy came to his children’s help and they were able to legalize their stay there, where they became gainfully employed.

Three of his children are domestic helpers in Italy for years now and they live in their own apartment. For years they have been asking their parents to visit them so they can tour Europe and stay with them in Rome. Mang Domeng has always refused because he is afraid of riding in airplanes. “Fortunately, all my children’s employers in Italy are kind and pay them well,” he adds.

This carpenter says that since he is still employed, he does not accept money from his children. But what they send him, like shoes, he enjoys wearing for their comfort since he is not brand conscious. Mang Domeng, the carpenter who wears Italian shoes, may not want to stay in Italy with his daughters as is contented doing carpentry work for the Lopezes. (Story by Dulce Festin-Baybay)